The Second Vatican Council, in its declaration on “Non-Christian Religions”, said that “the Church rejects nothing that is true and holy in these religions,” and encouraged Catholics to “recognize, preserve and promote the spiritual and moral values as well as the social and cultural values to be found among them.” Following this direction the All India Seminar in 1969, which was attended by the whole hierarchy and representatives of the whole Catholic Church in India, spoke of the “wealth of truth, goodness and beauty in India’s religious tradition” as “God’s gift to our nation from ancient times.” The seminar showed the need of a liturgy “closely related to the Indian cultural tradition,” and theology “lived and pondered in the vital context of the Indian spiritual tradition.” In particular, the need was expressed to establish authentic forms of monastic life in keeping with the best traditions of the Church and spiritual heritage of India.

March 21, 1950. Inauguration of Saccidananda Ashram at Shantivanam. Henri Le Saux (on the right) Among the gifts given by God to India, the greatest was seen to be that of Interiority: the awareness of the presence of God dwelling in the heart of every human person and every creature, which is fostered by prayer, meditation, contemplative science, the practice of yoga and Sanyasa.”These values” it was said, “belong to Christ and are a positive help to an authentic Christian life.” Consequently it was said, “Ashrams where authentic incarnational Christian spirituality is lived, should be established, which should be open to non-Christians so that they may experience genuine Christian fellowship.” The aim of our ashram, therefore, following these directions of All India Seminar, is to bring into our Christian life the riches of Indian spirituality, to share in that profound experience of God which originated in Vedas, was developed in the Upanishads and Bahagavad Gita, and has come down to us today through a continual succession of sages and holy men and women. From this experience of God lived in the context of an authentic Christian life, it is hoped that we may be able to assist in the growth of a genuine Indian, Christian liturgy and theology.

Saccidananda Ashram, Shantivanam, the ashram of the Holy Trinity, was founded in 1950 by two French Fathers, Jules Monchanin, who took the name of Parama Arubi Ananda (the bliss of the Supreme Spirit) and Henri Le Saux, who took the name of Abhishiktananda (the bliss of Christ). By taking these names and giving the ashram the name “Saccidananda” “Being, Consciousness and Bliss” a Hindu term for the Godhead used as a symbol of the three persons of the Christian Trinity, they intended anticipating the Second Vatican Council and the All India Seminar, to show that they sought to identify themselves with the Hindu “search for God”, the quest for the Absolute, which has inspired monastic life in India from the earliest times: they also intended to relate this quest to their own experience of God in Christ in the mystery of the Holy Trinity. Unfortunately, Father Monchanin died in 1957 before the ashram could be properly established, and Swami Abhishiktananda, after remaining for some time alone at Shantivanam, eventually settled as a hermit in the Himalayas, he died in 1973. Upon Swami Abhishiktananda’s departure in 1 968, the ashram was taken over by a group of monks led by Fr. Bede Griffiths from Kurisutnala Ashram in Kerala. Since 1980 Shantivanam has been part of the Benedictine Order as a community of the Camaldolese Benedictine Congregation. On the feast of St. Romuald, 19th June 1985, two Indian Brothers made their solemn monastic profession and one of his temporary vows as members of the Order. Fr. Bede (Griffiths passed away on 13th May 1993. At present, the community consists of eleven permanent members, three students, two novices and two postulants.

A Place of Prayer

The aim of the ashram is to establish a way of contemplative life, based on the traditions of Christian monasticism and of Hindu Sannyasa. Hinduism has a tradition of Sannyasa, renunciation of the world in order to seek God or in Hindu terms, “liberation” which goes back many centuries before the birth of Christ and continues to the present day. Our aim at Sahantivanam is to unite ourselves with this tradition as Christian Sannyasis.
Our life is based on the Rule of St. Benedict, the patriarch of Western Monasticism and on the teaching of the monastic Fathers of the Church, but we also study Hindu Doctrine (Vedanta) and make use or Hindu methods of prayer and meditation(Yoga). In this way, we hope to assist in the meeting of these two great traditions of spiritual life by bringing them together in our own experience of prayer and contemplation.
In externals, the community follows the customs of a Hindu ashram, wearing the saffron colour robe of the sannyasi (Kavi), sitting on the floor and eating with the hand. In this way, we seek to preserve the character of poverty and simplicity which has always been the mark of the sannyasi in India. A distinctive feature of the life is that each monk lives in a small thatched hut which gives him a great opportunity for prayer and meditation and creates an easy atmosphere of solitude and silence. There are two hours specially set apart for meditation, the hours of sunrise and sunset, which are traditional times for prayer and meditation in India. The community meets for prayer three times a day, in the morning after meditation, when the prayer is followed by the celebration of the Holy Eucharist, at midday and in the evening. At our prayer, we have readings from the Vedas, the Upanishads and Bhagavad Gita as well as from Tamil classics and other Scriptures, together with psalms and readings from the Bible, and we make use of Sanskrit and Tamil songs (Bhajans) accompanied by drums and cymbals. We also make use of “arati” waving of lights before the Blessed Sacrament, and other Indian customs, which are now generally accepted in the Church in India. In this way, we hope to assist in the growth of an Indian liturgy according to the mind of the Church today. ​ 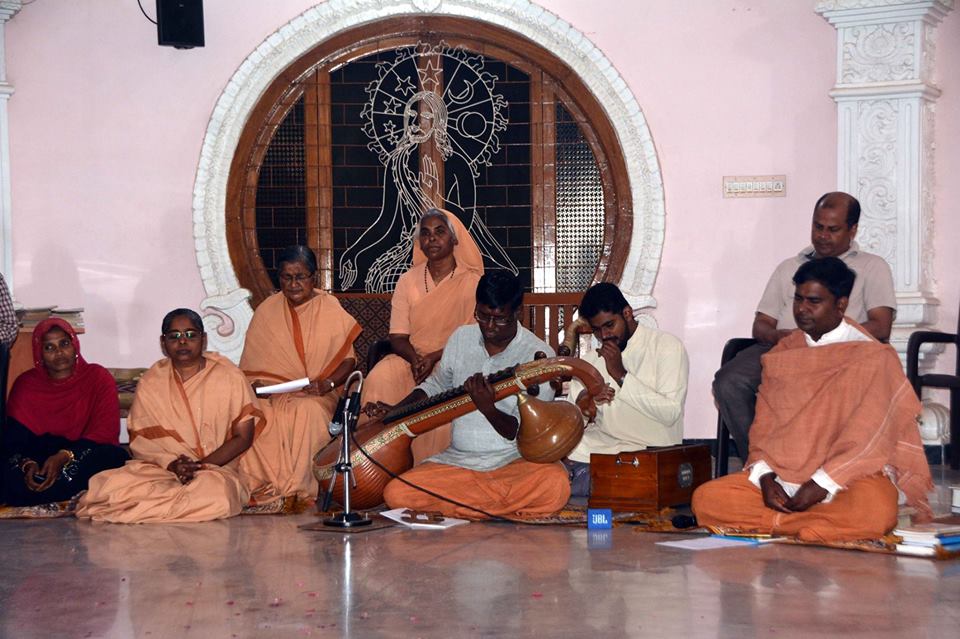 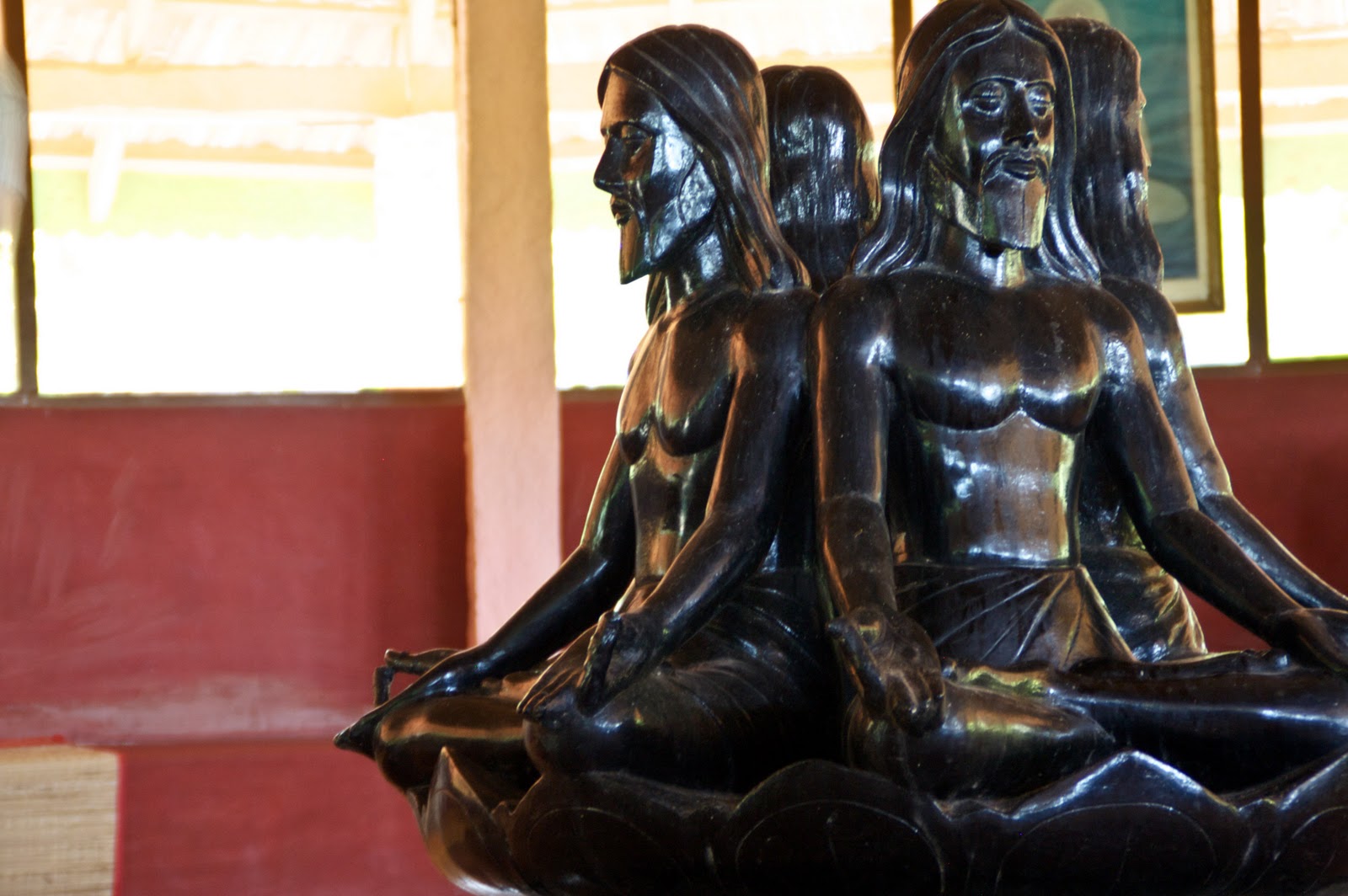 A Place of Meeting

The ashram seeks to be a place of meeting for Hindus and Christians and people of all religions or none, who are genuinely seeking God. For this purpose a guest house has been built, where both men and women can be accommodated for retreat, recollection and for religious dialogue and discussion. There is a good library, which is intended to serve as a study centre. It contains not only books on the Bible and Christian Philosophy and theology but also a representative selection of books on Hinduism, Buddhism, other religions and a general selection on Comparative Religion. We receive many visitors from different parts of India and from all over the world who are seeking God by way of different religious traditions and we seek to respond to them by providing an atmosphere of calm, quiet poor, you may kindly contact the guest master or Superior by email for study and meditation. No charge is made, but guests can make an offering to cover their expenses.
For those who seek to become permanent members of the community, there are three stages of commitment to the life of the ashram. The first is that of “sadhaka” that is the seeker or aspirant. The second that of “Brahmachari” that is one who has committed himself to search for God, who need not remain permanently attached to the ashram. The third is that of “Sannyasi” that is one who has made a total and final dedication, when the Kavi dress is given and he is committed for life to the search for God in renunciation of the world, of family ties and of himself, so as to be able to give himself entirely to God.
The ashram is attentive not only to spiritual seekers but is also conscious of the poor and the needy neighbours in the surrounding villages. Though the ashram’s primary call is to discover “the kingdom of God within”, it is also deeply proactive to the cry of the poor in their milieu through the words of Jesus “whatever you do to the least of my brothers and sisters that you do unto me.” The ashram runs a Home for the Aged and Destitute; involved in educating the children of the poorest; provides milk to the children, who are below three years to fight the malnutrition; the repairs / builds the houses for the homeless Thus the ashram gives free boarding and lodging and medical care to 20 aged and the destitute. There are more than 1000 children who receive books, school uniforms and clothes every year. We care for the children below three years of age by providing additional cow’s milk. If you desire to be the part of ashram’s mission to the poor, you may kindly contact the guest master or Superior by email address.
The ashram supports itself partly by cultivating 8 acres of land in its possession; by a dairy farm and from the contributions received from the visitors and well-wishers. In our serious efforts to support ourselves and the poor around, we constantly remind ourselves, the visitors and the poor we serve that an ashram is primarily a place of prayer, where they can experience the presence of God in their lives and know that they were created not merely for this world but for eternal life and where they find God.
​ 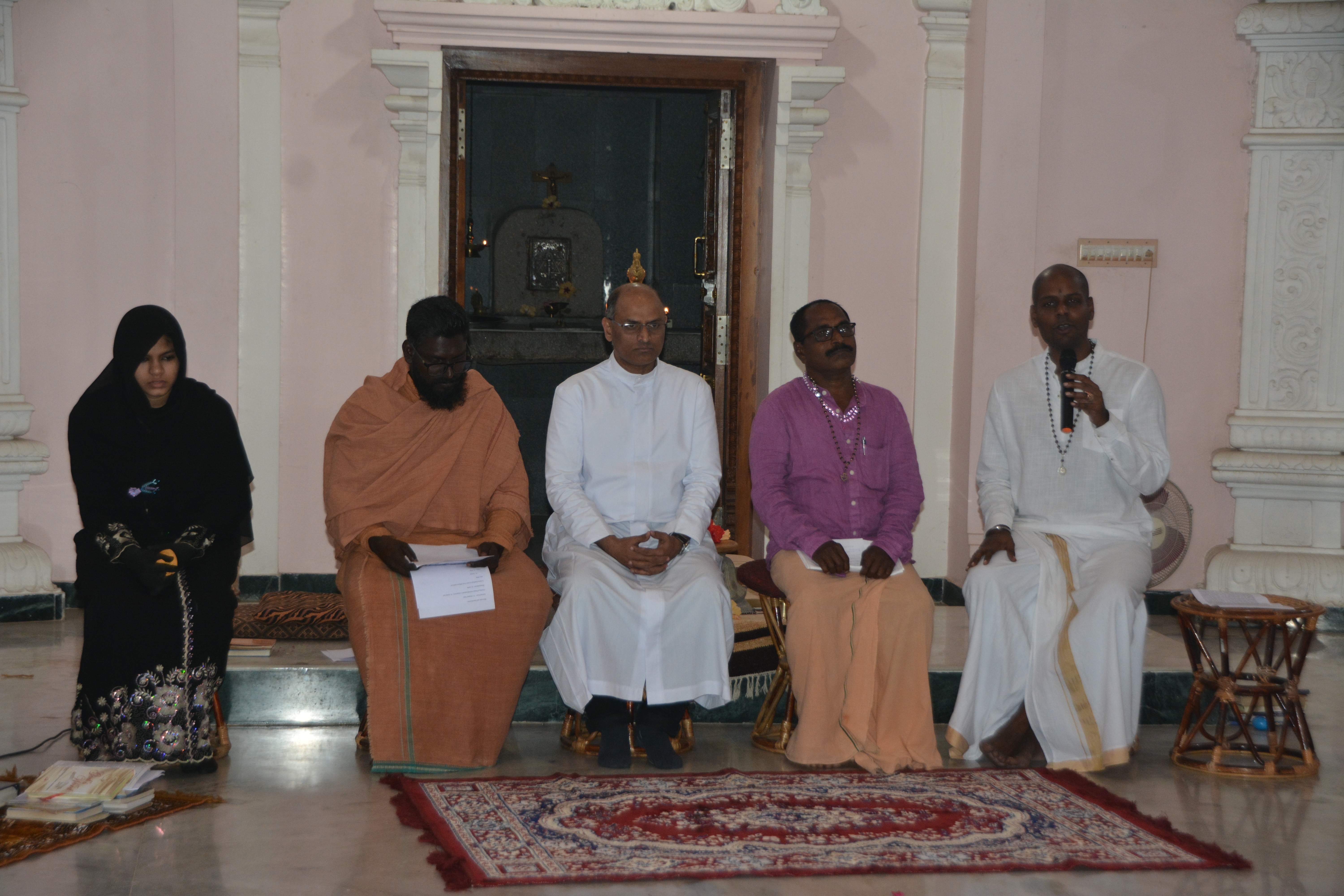 Please enter your email and get news update for donation to the Saccidananda Ashram.